Just over a week ago, we wrote about how the pound has fallen since the Brexit vote: Pound down, inflation up

In the last few days, the pound has started to bounce back up against the dollar, as you can see from this chart:

That's not the only shift that's going on.

The Bank of England's Monetary Policy Committee (MPC) meets monthly to decide what to do about UK interest rates.

Rates have been on hold at a record low of 0.25% since August 2016. The only one of the eight MPC members who votes for a rise is typically MIT professor, Kristin Forbe (and she's leaving the committee this month). Yesterday, she was surprisingly joined by Ian McCafferty and Michael Saunders. The last time three people called for rates to increase was May 2011.

This signals that policymakers are increasingly concerned about inflation rising even though the economy slowed to 0.2% in the first quarter.

The Bank had expected inflation to peak around 2.8% in the second half of this year, but now thinks there is a risk it will reach 3.0% by autumn.

The MPC said a further fall in the value of the pound would add to upward pressures on inflation, and that inflation had picked up more quickly than expected since last month's economic forecast.

The committee stressed that all members agreed any increases in the interest rate would be 'gradual and limited'.

Money managers now believe there is a 50% chance of a rate increase by May 2018, up from 12% before yesterday's meeting. 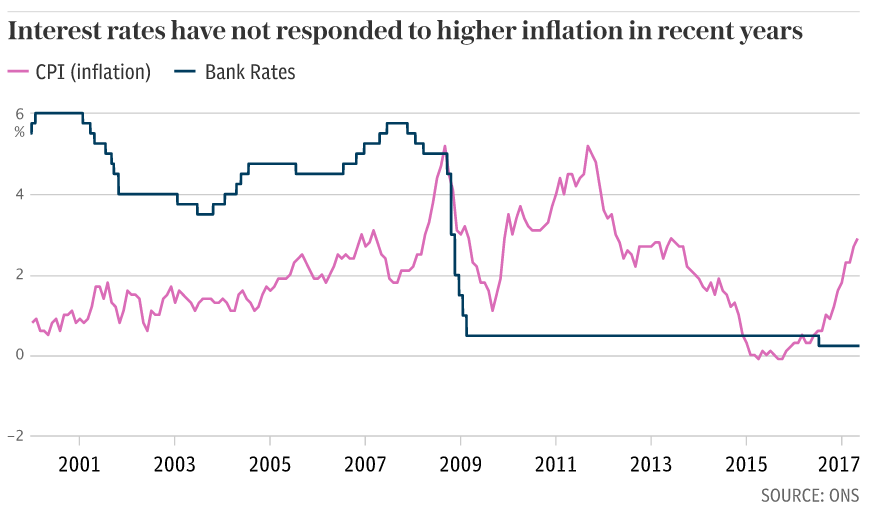 Posted in News and commentary

Previous Entry What the hung parliament means for business
Next Entry Business savings: Why it's worth shopping around