This is it! The end of 2017 has arrived and what an interesting year it has been, for Akoni, for business and for the country as a whole.

Brexit has been at the forefront of the news for the entire year and we imagine it will continue to be so for 2018. How could it not be? It is a huge change that this country is going through and nobody can tell what the results will bring for the economy and for the individual. Facing the unknown has never been an easy task for humanity and our instinctive reaction is often fear and despair. But like many times before, an uncertain future, involving hardship, has often resulted in greatness and prosperity. We are watching the developments closely, and in particular the decisions made that affect business.

While the majority of predictions about the UK’s prosperity in light of Brexit have been negative, business in the UK has continued to grow with the notorious entrepreneurial spirit of Britain not disappointing.

Below we go into more detail on:

Although confidence levels among Britain’s SMEs has suffered amidst the Brexit turmoil, entrepreneurship has not suffered. In 2017 SMEs in the UK accounted for:

Investment in UK PLC has been hampered since the 2016 Brexit vote but that hasn’t stopped the business population in the UK increasing – by 4% since 2016 – reaching a record of 5.7 million private sector businesses early this year. These numbers are published by the government each year in January. In a few weeks the numbers for 2017 will be released and we will likely see a further increase in this regard.

However, we are also seeing that the UK economy has slowed down over the past year, with the International Monetary Fund calling Britain a ‘notable exception’ to an improving global economic outlook.

Nevertheless, we at Akoni strongly believe that SMEs are significant contributors to the UK economy, as seen in the above figures. Therefore, we will continue to support SMEs and charities as the bedrock of economic growth.

Over the last year as our business has gone from strength to strength so has our team, and as the year draws to a close our number of team members has already doubled. We have a group of talented and motivated individuals, each in their own field, from various backgrounds, contributing valuable resources to the Akoni endeavour. 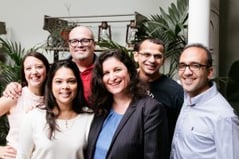 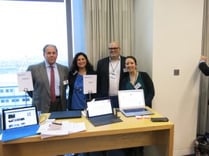 Throughout the year we took part in various events, had the chance to speak and present the Akoni proposition to vast and fantastic audiences, were selected for prestigious industry competitions and have been mentioned in major news publications.

Here are Akoni’s finest moments of 2017:

As we look to build on the success we have had to date, there have been a few sectors of the business community that we have been focusing on and we wanted to highlight some of our key takeaways for these communities.

At Akoni a key focus for us, along with assisting SMEs, is working with the start-up community to help these new businesses to reach their full potential by utilising their cash reserves. With an increase in co-working spaces (notably WeWorks but also Plexal and Rise London (the latter for the Fintech industry)), accelerator and incubator programmes often in collaboration with large industry corporates (CO:CUBED and HighTech XL to name a couple) and national led initiatives like London & Partners, the UK feels like an exciting place to be starting a new tech venture. And although there have been mixed reviews about the health of the UK economy, we have been particularly encouraged by what we have seen within these various ecosystems, including collaboration between incumbent tech start-ups in various industries.

Given Akoni’s specialism, we are seeing a number of fintechs growing in the UK, with the aim of giving SMEs more control of, either their existing assets (like Akoni), or providing easier access to funding sources (like Funding Circle and Capitalise) to allow the UK SME market to hopefully achieve even better returns than noted above. In addition, these new Fintechs are also providing sources of capital for the start-up industry, beyond typical VC investment.

With all this being said, we are excited for what 2018 holds for all tech start-ups.

2017 has been another year where charities have been in the spotlight. The response by charities and the public in donating to charities, in the wake of incidents at Grenfell Tower and the Manchester Arena bombing, as well emergencies beyond our shores, has shown that the charity sector in the UK is still huge force for good and plays an important role in society.

With that important role comes accountability and the focus in 2017 charity governance remained a hot topic. The continued scrutiny of the role of Trustees, and use of funds raised, together with the release of the Charity Governance Code outlining standards charities, should aim to points for a need and appetite for improved governance.

What is certain – the voluntary sector is a vital cog in the wheel of our economy and improved governance can be seen as a positive moved for the sector.

Brexit is going to have an impact on the charity sector in the UK. Aside from the £250m+ direct funding UK charities receive from the EU, the impact on the economy will likely put a squeeze on public pockets which could make fundraising harder. The value of the pound will also impact on those charities who operate overseas.

GDPR legislation, continued focus on governance and uncertain political times will also impact on the non-profit sector, but collaboration across the sector, innovation in fundraising and communications, and embracing digital technology in all functions of the organisation, are opportunities to be grasped in 2018.

Charities have faced turbulence in the past and have always found ways to raise funds and continue their important work. We look forward to playing a role in this and helping charities to maximise their income.

2018 will be a critical year for the UK economy where we may see one out of three scenarios:

Looking at current reports, it seems likely that interest rates will go up in February following the next Bank of England meeting, particularly if inflation remains around 3%. Unemployment will probably remain reasonably low and wage increases won’t be drastic either. When it comes to overall economic growth, the UK will not see as much growth as will be the case for the rest of the world. While we cannot speak about a recession just yet, the UK economy will face one of its most challenging times and the uncertainty around which of the three above mentioned scenarios will unfold, does not assist the economy with getting back to its expected level, that being the 4th or 5th largest economy in the world. But when it comes to economic forecasting they say that there are two types of economists: Those who cannot forecast and those who don’t know that they cannot forecast. In that same spirit, we at Akoni choose to remain positive.

We very much look forward to the events of next year and what possibilities they will open up for us and for business in general. We cannot help but mention Open Banking coming into effect from January 2018 and how this will change the landscape of finance for the better, allowing SMEs to leverage new types of financial services to their advantage. We are full of hope and optimism that next year can be a great one and that this country’s entrepreneurial spirit will catapult us into a fantastic era of innovation.

Akoni helps businesses make the most of their cash. Register free at AkoniHub.com and follow us on Twitter

Neither Akoni or its advisors or officers authorised to make any express or implied representation , warranty or undertaking as to the accuracy or completeness of this update. Furthermore, the writer expresses his /her own opinion and not an investment advice.