Where are corporates hoarding their cash?

The UK has so far defied the pessimists over Brexit, and done remarkably well in its recovery from the latest recession.

The fast-growing FinTech sector is doing particularly well, and the government has identified it as a priority area, saying it provides 60,000 jobs and contributes around $9 billion to the economy.

More than half the investment came from outside Britain, with a third coming from venture capital firms based in the United States.

The UK figure still lags behind 2015, when a record $676 million was invested in the first half of the year and over $1.3 billion for the entire year. However, from July 1 to July 23, UK FinTech has already raised another $155 million.

But it's not all good news.

Productivity is the 'magic pill' that raises economic output per worker and leads to higher wages and living standards – but productivity growth is lower.

One of the reasons for the UK’s weak productivity, is poor levels of investment.

Cash deposits by private non-financial corporations were up by more than 10% last year, reaching 648bn. That's equal to four times annual business investment and nearly a third of annual GDP. 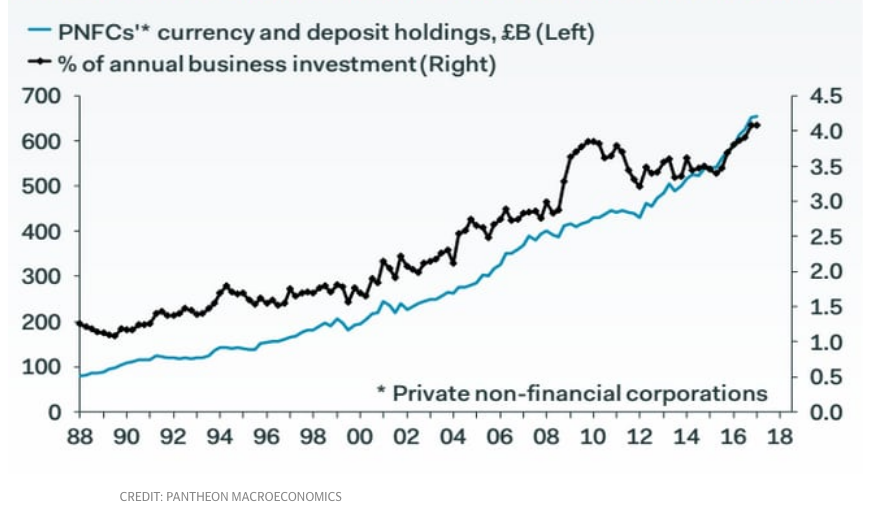 With uncertainty hanging over the UK economy, it seems that companies are looking to invest more abroad, particularly in the eurozone, and less at home.

Chancellor Phillip Hammond, has reportedly said that we must hold our nerve and stick to the plan for bringing the public finances back into balance.

SMEs are the bedrock of growth, and underpin our economy. We therefore support the calls for the Chancellor to make Britain the best place in Europe to invest, by offering tax incentives and any other measures.

Meanwhile, businesses should be using cash planning tools to generate income from their surplus cash. By moving it into accounts with the best interest rates, they could earn enough to employ a new staff member for improved productivity, or to launch a marketing campaign that drives further business growth.

Posted in Featured, News and commentary