The BoE rates decision and 2020 budget to address the Coronavirus, commodity prices and a financial crisis

The BoE made 3 important announcements with estimated extra funding of around £290Bn:

What does it mean?

A double-edged sword as normally good for borrowers and bad for savers. However, would the small positive impact on borrowing costs be sufficient to help UK companies or consumers to invest and spend more leading to GDP growth. The other important question, did the UK need a cut in interest rate?

The outcome of the negotiations with the EU are unknown and markets are somewhat worried about a potential poor outcome. In addition, a report from the Office for Budget responsibilities says that Brexit has already made the UK economy 2% smaller.  Yes

To Conclusion based on the above, we believe that it would have probably be enough to convince the BoE to cut rates by 0,25% at the next monetary policy meeting on the 26th of March 2020. However, with Coronavirus, financial markets in turmoil & oil price large drop combined with the need for a government to show leadership on its budget day and help confidence and you have a 0,50% rate cut. This is leaving little room of manoeuvre for the future and somewhat uncomfortable if we have a sudden increase in inflation and interest rates.

It is interesting to note that we are now back to the level of 2016 which was an economic measure to help the UK economy following Brexit referendum.

This is an interesting tool already used with some success. In general, this is good for banks as it provides cheap funding collateralised by a range of asset class and lowered their funding requirements from deposits. This was the case with the previous TFS scheme, which shows first a drop-in saving rates before starting to rise again.

For information, it is expected that part of It will be used to repay previous TFS drawings as they come to maturity.  However, based on the new low base rate, we do believe that banks will continue to attract deposits, albeit at a lower level of return.

The top tier 1 banks actually used this cheap funding for other purposed than lending to the economy while tier 2 &3 made full use of these drawings.  However, the biggest beneficiary was the mortgage market or the housing sector rather than the real economy. Indeed, we all know that lending to the real economy is riskier and need more capital.

Finally, as the scheme was coming to an end, there were already some concerns among challenger banks on how to repay the first drawings of the 2016 TFS maturing in 2020, which led them to look for alternative finance thus leading to some very attractive deposit rates in the last 6 months.

This is the real novelty, which is very powerful and will truly give the banks more room to lend (£190Bn) and lower requirements from wholesale funding (including deposits). The downside, which cannot be underestimated, is that the purpose of this buffer is to secure capital early in the buildup of systemic risks or future crisis. Are we not in a crisis?

The whole budget is well covered in the press and I would like to focus only on the government decision to borrow to fund its significant rise in public spending. I really mean serious borrowings which will be up 37% to £55Bn in this year from a £40Bn forecast and rising by 76% to £67Bn in 2021-22 up from a £38Bn forecast. According to the OBR the UK national debt will crest the £2Trillion mark in 2014-25.  If GDP growth is limited then tax will need to be increased in the future as lower interest rates policy are unattainable in the long term with little positive impact on growth. 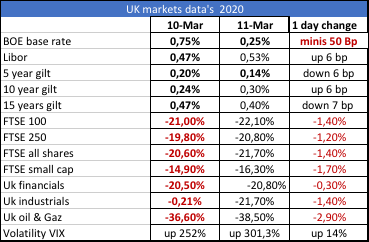 Although, a very aggressive budget, market reaction was somewhat neutral and the overall health fear and its impact on growth is still driving the market down. The late US decision to close its border will not help the market today.

What does it mean for cash?

There is no doubt that deposit rates, in general, will be lower but there are no reasons for cash to stay in a poor interest banking account and better returns can be achieved. As per our recent paper, we at Akoni, believes that cash offer a better risk adjusted than equities in a defensive strategy or to address disruptive events:

Akoni helps businesses make the most of their cash. Register free for access to market-leading interest rate accounts, cash planning tools and tips at panel.akonihub.com and follow us on Twitter